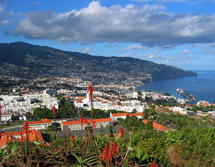 Funchal, capital of Madeira, is located on a bay and started out by occupying a small extension of land by the sea, going up the mountain slopes as it grew. A few walking minutes away it is possible to stroll down the centre of the city, where you have access to all commerce and services, and can also visit the town’s main ex-libris. It can be divided into 3 historical nucleuses, which are also its first three parishes: São Pedro, Santa Maria Maior and Sé. The Historical Part of the city, in Santa Maria Maior, was initially an area for fishermen and craftsmen. Recently remodelled, the ancient part came to life with its bars, restaurants and lounges. The city market, known as Workers’ Market, is located nearby. This market is a picturesque place overflowing with Madeiran atmosphere, sprinkled by an amalgam of scents, fresh fruit, flowers and spices. The fish market is also in this area. Here you can find all kinds of typical fish and seafood of the Island, such as black scabbard fish, tuna, limpets and wrasse. Also near the Historical Area is the Madeira Story Centre, where the visitor can get to know the history of the island. It is also in the vicinities of the Historical Area that you can find the teleferic station, which links the town to the Monte. 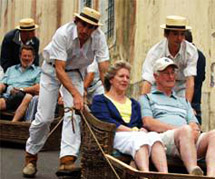 Monte is the highest parish over Funchal, known for its history and botanic heritage. After visiting, those with a healthy heart and lovers of adrenaline, can slide down in the traditional wicker toboggans, a means of transportation that was very usual in the older days. 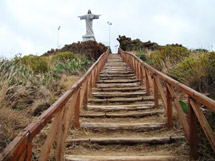 Half way between Funchal and the Council of Santa Cruz, in Caniço de Baixo, you can find the first exclusively nautical reserve made in Portugal known as Garajau’s Natural Reserve. 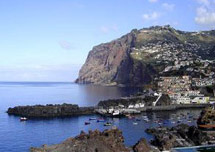 Just a mere 9km away from Funchal is Câmara de Lobos, a town which was, until not too long ago, a fishermen’s town, known as such since the discovery of the island, thanks to the sea-wolves inhabitating the bay. Câmara de Lobos also became known due to Winston Churchill’s paintings. Also part of the Council of Câmara de Lobos, the belvedere of Eira do Serrado allows seeing Curral das Freiras, a huge valley under an amphitheatre of mountains spread perpendiculary, shelters a remote village in its lowest part.

At the North of the Island, crossing the central ridge, stands São Vicente, located in the mouth of an imponent green valley abounding with Laurisilva. The town has a Volcanology Centre at the São Vicente caves, where you can visit the impressing underground lava corridors and get to know other geological wonders. 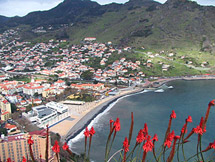 In July 1419, João Gonçalves Zarco and Tristão Vaz Teixeira, who discovered the Islands, came ashore in the beach of Machico. This same beach is now covered with golden sand. To know the history of the municipality, the best thing to do is to visit the Museum Nucleus in Solar do Ribeirinho. If you are staying in Machico, it is worth going to Caniçal, a fishermen’s village which was the centre of whale hunting, testimonies of which can be found in the Whale Museum. The town is famous for its restaurants, which serve typical delicacies, such as limpets, periwinkles, wrasses or fresh “castanhetas” (small fried fish). 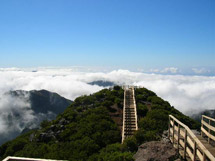 Pico Do Areeiro And Pico Ruivo

A drive to Pico do Areeiro, the third highest part of the Island, offers visitors a magnificent landscape of the central ridge and its peaks. The footpath connecting Pico do Areeiro to Pico Ruivo is one of the most beautiful, but also one of the most challenging ones. For those who cannot cross it and still wish to enjoy the magnificent landscape from the highest spot of the island, an alternative and much more accessible footpath allows reaching the peak through the other side, starting the route in Achada do Teixeira in Santana.

Mostly known for its typical straw houses and for the Theme Park, a fun place for all ages, crossing the history, tradition and culture of Madeira. Santana offers one of the most beautiful strolls on foot, with 6 parishes that invite you to discovery (Arco de São Jorge, São Jorge, Santana, Faial, São Roque do Faial and Ilha).

Porto Santo, located some 40Km Northeast of the Island of Madeira, has few population. It is very quiet during most part of the year (except in August, when many summer tourists visit), and is a small idyll for those seeking to run away from stress and to rest. The 9 km extension of its golden sand beach, bathed by crystal and serene waters (which are never below 17º C), is particularly appreciated by those who enjoy going to the beach, which is possible to do all year long, for temperatures vary very little along the year (23ºC in the Summer and 19ºC in the Winter). The capital of Porto Santo is called Vila Baleira, where there are daily connections to the Island of Madeira, by air or sea. Propitious to water sports, diving and big game fishing are the most popular modalities in the Island, although it offers good conditions for sailing, canoeing, wind-surfing and kite-surfing. Much less hilly than Madeira, the island of Porto Santo is perfect for bicycle strolls. Bikes can be rented in hotels or in downtown. For those who are not fond of pedalling, they can also rent 2 or 4 wheel bikes, or cars.

Please fill this form to proceed.

No times for this date! Please change date.